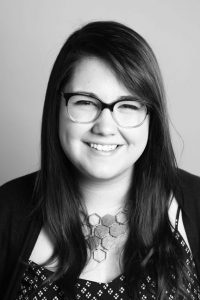 What does your bank have in common with Disney World? This may seem like a ridiculous question, but Mabus Agency’s Motion Director, Devon Hosford, thinks it’s time community banks start asking themselves this very question. As this week’s Marketing Money guest, Devon shares a few stories from her time at the house of the mouse, and delves into how that experience informs her creative approach to bank marketing. We also learn about John’s subpar lifeguarding abilities, and the group does a deep dive into the meaning of “pigeonholed.”

Devon Hosford is a Motion Design Director at Mabus Agency. She has worked with a diverse range of clients and brands, including Cartoon Network, Adult Swim, Nickelodeon, McDonald’s, Quilted Northern, Charles Schwab, Adobe Systems Inc. and The Walt Disney Company. She escaped to Georgia from New Jersey in 2010 and graduated from the Savannah College of Art and Design 4 years later. She currently resides in Atlanta, GA with her two cats and her person. She also serves as a senior Chapter leader for Lean In Atlanta, where she works to empower women in the Atlanta-metro with education and support. When not designing or animating, she spends time working on her fixer-upper and searching for vintage furniture in need of some TLC. She prides herself on cooking from scratch, and will feed anyone that gets too close.